The mutual currently has significant excess demand for cover and is now beginning to attract new capital to the pool. Especially after the Pooled Staking release. These are both really good signs. But now we actually have a good problem, new capital is coming in quicker than the mutual can effectively use it.

Getting into the details, the limiting factor on cover purchases is the Minimum Capital Requirement (in ETH). MCR is currently 14,473 ETH and increases by 1% per day if the mutual has “excess” capital, where excess is defined as total funds being above 130% of the MCR.

Capacity on any system is limited to 20% x MCR which roughly equals $700k at current ETH prices. To double capacity (assuming a flat ETH price) MCR would need to increase to approximately 29,000 ETH. At the 1% per day increment this would take a minimum of 67 days, assuming every single day resulted in an increment.

I believe the mutual can attract capital much faster than this and would benefit from scaling faster and taking advantage of the current market conditions. Without this change we may miss an opportunity to attract material amounts of capital to the mutual.

The increment process can be quite easily sped up by shortening the period between MCR increments, eg from 1 per day, to 1 per hour. This would reduce the time taken to double the MCR from min 67 days, to less than 3 days (again assuming sufficient capital inflows). In reality it would likely take a few weeks.

The downside is that the NXM price is unlikely to progress deeply into the exponential part of the bonding curve while this accelerated incrementing is ongoing, even though the NXM price would still be increasing overall. So this is about sacrificing the potential for sharp short term price increases for faster capital scaling, so we can access demand for cover much sooner. It would also likely drag down the MCR% from the current mid 140% levels to 130%. So there is likely a short term sacrifice for a much greater medium – long term benefit.

The quicker incrementing should be more of a temporary measure, rather than permanent, so I suggest it is only put in place until MCR hits 100,000 ETH initially, after which it reverts to once per day. The accelerated approach could easily be extended if members wish but I don’t think it should be the default setting.

If the community is supportive we would look to formalise via a governance vote fairly quickly to take advantage of the current DeFi market activity.

This is a great suggestion! Yes, I would agree with the proposal as this kind of attention is godsend. We should aim to meet the demand as much as possible. I believe most people here are for the long term accruals of their token value. So this would make a lot of sense.

Agreed - the proposal is well thorught out.

I think it is best to get this done as soon as possible so the demand can be met. It is difficult to know what happens in the market 2 weeks from now, so we should profit from the inflow and attention while we can.

The increment process can be quite easily sped up by shortening the period between MCR increments, eg from 1 per day, to 1 per hour. This would reduce the time taken to double the MCR from min 67 days, to less than 3 days (again assuming sufficient capital inflows).

Thanks Hugh, I think this makes sense to capture the latent demand while it’s there. However it would be useful I think for the community to compare various scenarios of increase in speed (eg 1/hr vs 1/3h vs 1/6hr etc), at the very least so that members can make a better informed decision.

Thank you Hugh, I’m strongly in favor of this proposal and appreciate the timeliness. As a long-term holder, I don’t mind sacrificing the short-term ability to enter the exponential part of the curve for growth. The main thing that matters at this point is winning the land grab – there isn’t really competition yet in defi insurance but there will be, and Nexus has a great opportunity to grow its early leadership into a strong defensive moat. An important part of that is reliably meeting demand.

I also agree with @lautumsuxen – it would be helpful to have an informed view of the impact of various speeds. Are there negative consequences of going too fast (outside of the token price)?

@lautumsuxen @aleks re the speed.

It’s simply adjusting the rate at which new capital is “absorbed” by the mutual, so the only impact is really on token price. The faster it is the more likely the MCR% is likely to plateau at 130%, which indicates capital is being fully absorbed as it comes in. The slower it is then the more likely the MCR% will rise above 130% and capital is being partially absorbed. Of course the big unknown is how much capital will come in and at what rate.

My perspective is that strategically the best course of action is to absorb capital as fast as possible to grow capacity quickly. We can then turn it off, or slow it down, once a reasonable degree of scale has been achieved.

I’m not fixed on 1 hour necessarily, it just seemed to be the fastest that would be reasonable from a technical viewpoint.

Incrementing MCR once an hour seems a bit fast to me. At the current MCR% it’ll take 26 increments to get to 130%. If we were to do once an hour that would cause the NXM price to crash in a day and drive a lot of newcomers away and cause MCR% to further drop below 130%.

It took nine days for MCR% to go from 130% to 156%. Assuming the rate of new capital stays the same, something like 3-4 times a day (every 6-8 hours) will grow capacity quickly and slowly reduce MCR% but not cause the price to crash.

Won’t this be mostly a one time issue? e.g. the first day we crank up the speed, there will be a price decline, but from then on, MCR should stay near 130% fairly consistently.

It’s a great point though, having the token go down in value right after you buy is unideal from a UX perspective (even if the decline is small - which it generally would be after the first day). Following that line of thinking, shouldn’t we keep the speed as high as possible to avoid getting MCR significantly above 130%? Once we hit 130%, the higher the speed, the less aggressive the intra-day devaluation.

Considering the current rate of inflow I think a decision needs to be made today - the inflow currently sits between 1 and 2.5k ETH/day.

Edit
GaetanSemp made a good point on Discord and I have to agree with him. I have quoted his message in below.

I have done my calculations again this morning with current data. As MCR% went higher during the night, 1% per hour seems fine cause it would take 28 hours to reach 130%, which give plenty of time for investers to join and add capital pool. This will compensate a bit the price loss

Yesterday I were in favor of an increase every 3 hours based on my modeling, but I have to concede that he makes a better point. Especially considering that by the time that this is implemented the pool has no doubt increased. I now support increasing every hour as originally suggested.

In all the discussions about this I think it was widely accepted that time is a critical factor and more important than getting the parameters exactly right.

Risk
To put the risk into perspective the price of ETH dropped 3.6% yesterday and this sort of volatility is quite normal.

In the past we have also seen large drops in NXM price - this March the price fell 50% and 10% drops in price happens all the time without anybody even noticing.

I admit that this is a different thing to a contract parameter change, but my point is that a decrease in token price is not going to cause great harm to the project.

At worst I think we will see a short term decrease in price, but IF that happens my opinion is that we will quickly see it replaced by an increase in token price because of the inflow of funds. In the current market growth funds growth.

Great proposal and should be done as soon as possible. I would do every 3 hours though.

I’m now thinking we go with every 4 hours. I came up with 1 hour before the MCR% spiked very high, so the downside on token price from current position wasn’t really an issue. Using 1 hour would quite likely bring the MCR% down to 130% over a few days and cause a quite large decrease in token price.

4 hours seems like a significant speed up and gives much more opportunity for the MCR% to remain above 130% and therefore not crash the token price.

The ideal situation is that the increment speed is fast enough but not too fast, so that MCR% either stays the same or slowly reduces to 130% over several weeks. This would mean token price is still increasing or flat.

It’s very hard to work out what rate that is, but 1 hour seems too fast and we clearly need to speed up.

I’m inclined to move forward with a governance proposal on this at 4 hours given the quite strong support so far.

That seems like a good compromise, thanks all for sharing your thoughts.

Good compromise. MCR% shot up to 179% today so every 4 hours will bring the MCR% down slowly without crashing the price.

Let’s get this governance vote as soon as possible before the rate of capital inflow increases even further.

For what it is worth I support moving ahead with a governance proposal for an increase every 4 hours.

My personal preference is to go lower, but getting the proposal out there fast is more important for me.

I agree with the proposal and the overview. Land grab is important. Holders see the value.

As this money comes in, I think it’s critical to improve the interfaces for managing tokens, voting, and delegating though.

Call it “Member Relationship Management.” If possible, there should be an initiative to improve this experience for members. That’s as much a part of the capital attraction and retention process as any.

Realize it’s a different proposal, but the more money that comes in, the more that members will want ways to manage/view their funds, which will drive additional interest.

Hard to take my marketing hat off…

I should add that I do love the pooled staking interface. Nice work.

Is the governance module supporting votes on specific values ?
If yes the possible values could be 1, 4 or 24 (current).

Thanks everyone for your comments!

If approved the Advisory Board will change the MCR increment speed from once per day to once every 4 hours until MCR reaches 100,000 ETH.

In the future I would also propose another governance vote to reduce the voting time from 7 days to 3 days (72 hours). That’s the time it takes for claims assessors to vote on claims and I don’t see a reason for other governance votes to take much longer time. 3 days also helps with urgent changes like this one.

Wrote an article explaining the incoming proposed changes to Nexus Mutual’s MCR increments, tried to summarize the problem at hand and explain the solution Mutual members came up with to solve it.

Hope this helps to anyone less familiar with Nexus Mutual as a protocol. 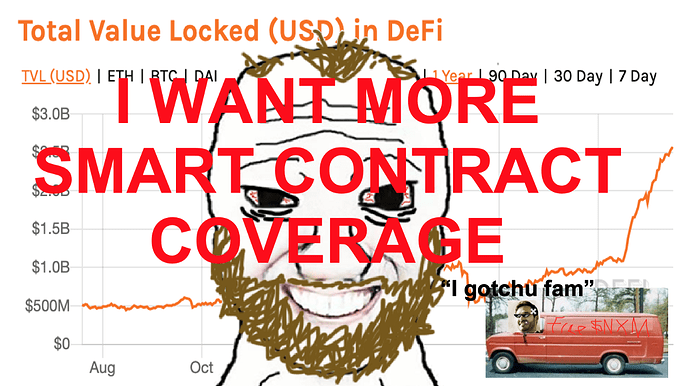 Earlier this year, Nexus Mutual popped it’s cherry when it paid out its first wave of claims for the bZx hack. Crypto insurance was…