This post is a follow-up on a previous discussion and the temperature check that happened on snapshot :

The signalling vote has passed with 6.7k NXM voting to approve and grant a 3rd party ( most likely someone from the Advisory Board or Community Fund) the ability to send funds to a centralized exchange for execution.

Now that the community has formally agreed to support the ETHPoS fork and to sell our duplicated assets on the PoW fork, we still have to agree on a few points before a well rounded solution can be proposed for an on-chain governance vote.

There are multiples options here that are a function of :

Do you think we need more funding for the community fund ?
Should we increase our DAI allocation in the Capital Pool to reduce the asset-liability mismatch?
Should we buyback wNXM since we believe it is undervalued ?

These are all valid examples that could make the starting point for this discussion.

Then, members can review and discuss. Once there is general consensus about the most viable options, another Snapshot vote will be used to determine the method to capture value from ETH PoW. After that Snapshot vote, a formal on-chain governance proposal will be put up for vote with the options to approve or to deny.

We have 106,858.‍97 in ETH held in the capital pool, and I have excluded the investment allocation to Maple Finance, the stETH, and DAI held in the pool, as this likely won’t have any value on an ETH PoW hardfork.

Regardless of the value we can realize, I would be in favour of a 50/50 split between acquiring DAI and buying back wNXM.

Either Option A or B would be my personal choices for any value captured from ETH-W after the merge.

I’m quite open to what we actually do with the funds as all are quite good options.

50% buyback wNXM for the Community Fund and 50% as DAI for the Capital Pool seems reasonable to me.

I will post this again, because no one seemed to pay attention to this the first time, or for that matter to what I said about Bancor payouts in the claims discussion in Discord.

Selling POW ETH (AKA ‘fake ETH’ ) will become a shitshow of lawsuits under American securities law. No way the potential benefits from selling ‘ours’ can ever compensate for the risk of becoming complicit in US securities fraud, and having our Treasury wallets blacklisted a la TornadoCash.

I am not a fraudster, most of us are not, and the Mutual should therefore all take that approach to this this issue.

We could also try selling our toenail clippings…maybe worth more.

I will post this again, because no one seemed to pay attention to this the first time,

I paid attention, didn’t quite understand though. First thing I would say is that the community already approved to do it, we’re just discussing further details now.

More importantly, I’m not a law professional but 1) I don’t see why it would become a shitshow, was it the case for previous forks? and 2) Nexus Mutual is not an US regulated entity …

Aleks Larsen : “Buying wNXM and sending to community fund seems like a good use of proceeds.
If there are enough proceeds, using some of them to mitigate asset liability mismatch also feels pressing and lets us avoid selling ETH. Perhaps 50/50 to each of those use cases, provided that the proceeds are worth at least X.”

Nico Santini : “It would be smart to use 50% to buy back wNXM for community fund and 50% DAI to help shore up the capital pool.”

Rei Melbardis : "
wNXM to the community fund and buying DAI to put into the capital pool are both good uses.

Should be about 50/50 assuming we can put at least 1m DAI in the capital pool, otherwise I’d probably be in favour of putting entirely towards community fund wNXM - not worth the technical implementation."

Gauthier (myself) : My opinion would be to buy wNXM and send to the community fund, because 1) it is very undervalued and probably the best ROI 2) our recent mandate expansion allow us to manage actively the community fund, giving us flexibility. 3) Community fund has melted very fast this bear market and if we don’t do this, we might need to mint new NXM.
I would also support a mix between CF and Capital Pool.

Thanks @GordonGekko for raising this and your extra comments on last weeks call.

I see your perspective here, though I do have a different view on the risk involved, and in general believe the risk is relatively low. Of course, I’m not a lawyer, so am by no means an expert and would really appreciate any further comments from the community on this aspect.

One reasonable approach is to include a minimum $ value that we’d be happy taking this risk for. eg if the ETHPoW is worth less than $1m don’t bother selling it. This probably makes sense on a few fronts anyway.

Given the quite heavy weighting towards wNXM, it’s probably easier to just do 100% wNXM for Community Fund, so I’d lean towards that option.

@BraveNewDeFi will leave you to coordinate with @Gauthier on next steps.

This proposal has been transitioned to a Snapshot vote to determine how members would like the mutual to use the proceeds of the ETH PoW sale.

After an open comment, review period of more than one week, the choices presented in the Snapshot vote are:

Members can vote to signal their support for how any proceeds from the sale of ETH PoW are used. After this Snapshot vote concludes, Gauthier will work with the Advisory Board to put the final text of this proposal up for an on-chain vote, where members will be able to vote in favor or against selling the ETH PoW.

ETHW sale and wNXM buyback has been executed!

After members voted to approve Proposal 180, the mutual’s ETHW from the PoW chain was sold on a centralized exchange and the funds were used to buyback wNXM. The execution is now complete.

The wNXM has been sent to the Nexus Treasury per the terms of Proposal 180.

Thanks to @Gauthier for starting this discussion and working to turn his original Getting ready for an upcoming Ethereum PoW fork post into an on-chain vote, which members approved. Below is a graphic that highlights the process this discussion, on-chain vote, and execution of the ETHW sale and wNXM buyback. 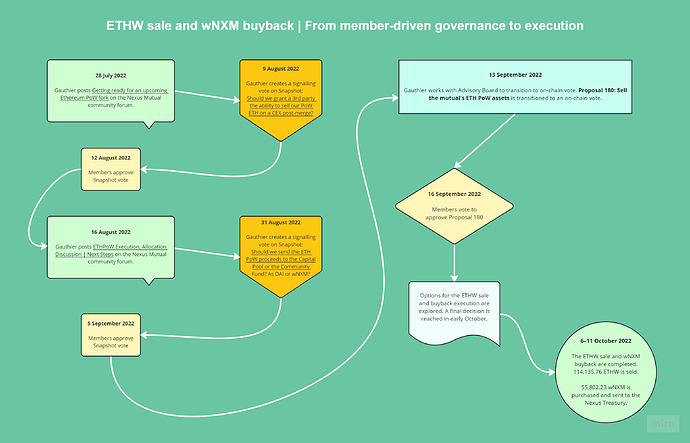 Thanks to everyone that contributed to the discussion and to team members that managed the execution/risks !