I’m on board with @adrian at this one. He articulated well. I feel MCR% dropped for reasons more related to overall market conditions, and feel we are close to the bottom, as the market hinted this already since yesterday (See UNI, SNX, price, etc).

I will vote against this long term bonuses, though I appreciate the effort put into the idea.

I’m more for working on mechanisms that bring value to NXM by increasing overall covers purchased via mechanisms like attractive, dinamic pricing, easier platform experience and modules that make it easy for people to purchase cover (for example directly on the respective platforms -> Lend DAI on Curve, have a popup ask you wether you’d want your funds insured on not)

It is great that we are finally warming up to the idea of using our governance system to enable similar mechanics as other DeFi platforms, namely introducing inflation to reward good protocol behavior.

What I don’t like so much about this particular proposal is the fact that is it tied to the MCR % and that it seems really counterintuitive to have locks like a year or so in blockchain. We would turn the Mutual into a speculation powerhouse whenever MCR % is high above 130% and would indirectly discourage staking or claim assessment participation. Also locking up capital below 130% means in no way that we are driving the price up, we just add inflation to those which were long anyways - see @nexudm answer, which I would echo.

Looking at the current design, we already have great ways to lock up capital, the rewards are just not as big as they could be:

Why don’t we add inflation to those who lock their capital into these mechanics and participate? This way we could also incentivize certain staking behavior, i.e., for example, divide all inflation into 70% for staking and 30% for governance/claims. Then divide the staking rewards further into how much cover is purchased per contract vs staked and reward stakers of those contracts more who have not reached the minimum price.
The rewards could increase linearly up until withdrawal the longer the capital was locked there, similar to the math that you proposed, no need to have clunky one or two-year locks, which didn’t work well for PoS systems that use those either.

The inflation itself could then be a function of how much NXM is locked up (similar to proven ETH2.0/Cosmos/Polkadot staking mechanics). I.e. up to 50% for a year when the participation rate is low, down to 5-10% when the vast majority of NXM is locked up in the system.

The inflation itself could then be a function of how much NXM is locked up (similar to proven ETH2.0/Cosmos/Polkadot staking mechanics).

dPOS networks like Cosmos and Polka need inflation, as the only way for the network to reward stakers.

But Nexus has a revolutionary model of creating / redeeming NXM based on a formula and bonding curve. This is / was brilliant and it’s what attracted me, along others, to Nexus Mutual economics. Adding extra inflation on top of this will, in my opinion, create more complexity for little effectiveness, and will do more harm than good.

dPOS networks like Cosmos and Polka need inflation, as the only way for the network to reward stakers.

That’s only true when the fee rewards are so low that otherwise nobody would run a validator. It is a necessary step to encourage participation until rewards increase. The same situation that we are in with Nexus Mutual. I agree that inflation should not be toyed with, but the current risk/reward ratio doesn’t incentivize a lot of stakers and we have easy tools to fix that - temporarily if necessary.

We should incentivise stakers via other methods, rather than inflation. Currently, stakers don’t come because the rewards are low. The rewards are low because there are little cover takers. Cover takers are few because pricing is unattactive and there perhaps other reasons, like technical dificulties in buying covers.
We should fix pricing and make the cover buying a more simple process. There is another thread for that.

I agree with all you said and my understanding is that Nexus is working on all of those things but many of those improvements won’t be ready for a while. I am sure Nexus is aware of the fact that a very large amount of NXM is going to be finished unstaking over the next 30-45 days and with us being at our current MCR we are going to hit the 100% floor unless we can come up with a way fairly quickly to make the capital in Nexus a lot more sticky. Incentivizing lock ups is definitely one way to do that, and locking for 1 year gives the mutual a large runway to deliver on a number of high priority items before the lockups expire. The inflation is moot if you lock up because you will get more in yield than whatever the inflation ends up being. Not to mention we could have much bigger issues than inflation if MCR hits 100% and gets stuck and then a large claim comes in.

Lots of good points being raised on all sides here.

We’ve been looking into the details and we discovered a potential attack vector with the implementation that makes this more complicated than we originally thought. This means it’s going to be hard to get this out quickly even if we had broad agreement (which I’m not seeing right now).

Of the benefits of this proposal all except one are not very time sensitive. The time sensitive one is upcoming unstaking potentially bringing us below 100% MCR. fyi - a chunk of that unstaking is me rotating stakes so that’s not a concern re sells

. All other reasons are not urgent and in my view other roadmap items should take priority over them.

There is also a potential way of natively allowing long lock-ups on staking when we move to staking 3.0 for additional rewards. I mention this because it’s been raised by a few people as a better use of additional rewards. Happy to write up more detail here if there is interest.

Overall, because we can’t really address the time sensitive issue quickly and we don’t have broad agreement it seems a bit premature to rush something. I think we should continue the discussion on where/how we want to incentivise members, get some more concrete ideas and gauge sentiment with signaling votes as next steps.

get’s the popcorn ready for MCR% to hit 100%, wNXM to start trading at a discount (sub 100% MCR% equivalent prices) on the open market, and then the non-stop FUD following

It doesn’t seem like there are a ton of options that could be implemented with fairly low effort/complexity. 1) do nothing and the above likely happens. 2) Implement lock-up w/ incentives 3) announce that rewards will be retroactively given to NXM pooled stakers, sometime in the future.

Whether #3 is a utility token, more NXM, or something else, the point is that it is essentially doing a #2 style rewards without actually needing to implement it right this second. Perhaps the mutual announces there will be some retroactive incentive beginning on “7/1/2020”. Maybe sometime next year the mutual implements a lock-up contract, and upon the user locking for 1 year they receive the retroactive incentive as well as the lock-up incentive. Again, it wouldn’t be as effective as having an actual lockup in place, but a verbally announced retroactive incentive for staying with the mutual and pool staking would be quite powerful in itself. As a benefit of making it a pooled staking incentive, it only rewards NXM holders (not wNXM holders) and only those NXM holders who are actually staking and helping expand coverage limits.

With option 3) it’s much easier to technically implement something like this. I’m a bit skeptical on if it will actually attract material capital but I’m happy to be convinced otherwise!

Looking for wider input on if you would or wouldn’t lock up extra capital on the following basis:

I don’t think we have any cases where a protocol has publically announced retractive rewards. The closest is Uniswap which did retroactive rewards but it was not pre-announced. What I do know is the DeFi community received what Uniswap did very positively, and not only in a financial sense but also in a social sense.

I think this type of retroactive rewarding could be implemented by any protocol that wants to try and make the money in their protocol a bit more sticky. I went ahead and posted a poll on Twitter to ask the question broadly. So far with the votes that have come in, it looks to be more than a 2:1. Two saying it would make them more likely to park their money in the protocol doing the retroactive rewards and one saying it wouldn’t make a difference.

I’ll add this thought as well. I think this would be a very unique idea. Retroactively rewarding to pooled stakers a lock-up utility token. What this token would do is boost yield for a future lock-up mechanism that Nexus implements. How it would work is when the user locks up NXM tokens for 1 year they send both NXM and this lock-up yield boosting utility token to the lock-up contract and some sort of boost is calculated from this utility token.

Not only do I think people would go nuts for something with such a massive utility (yes, I think yield boosting would be massively desired utility), but this type of retroactive reward wouldn’t inflate NXM at all. Let’s say next year Nexus retroactively releases this utility token and launches an official lock-up mechanism, then the lockup itself is 1 year so you are talking 2 years from now before there is any material inflation.

With 106 votes in, almost 3 out of every 4 say retroactive incentives paid sometime in the future would make them more likely to stay invested in a protocol today. 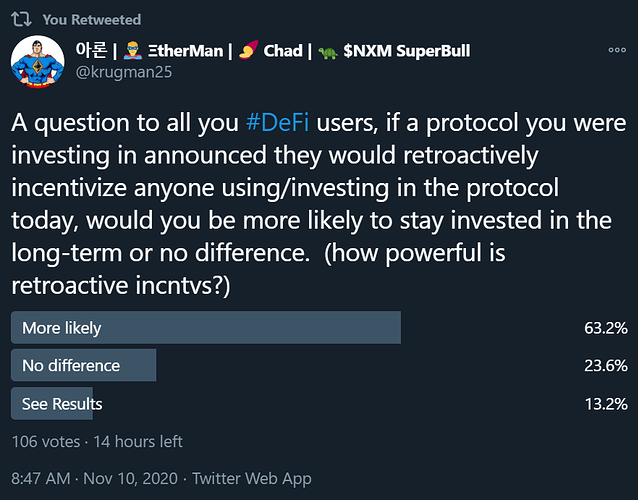