As our community prepares for the Nexus V2 launch, the existing Hub leads are proposing a restructuring of the Nexus Hub model.

The initial Hub model has been operational for one year, and in that time, we have identified processes that can be streamlined for greater efficiency, new areas of focus our Hubs can add to their mandate, and initiatives that our existing and future Hubs can focus on to be more self-sufficient. Given current market conditions, this new model presents an opportunity for our existing Hubs to focus on growth alongside the launch of Nexus V2, while working to offset treasury expenses with additional revenue streams.

For those who want to review the priorities, team members, detailed budget, and more for each Hub, we have included that information in a separate post entitled Nexus Hubs: Proposed Teams, Priorities, and 6-month Budget Breakdown. In the near future, we will finalise and launch a community website where those details will be available and maintained by the Nexus Hub leads. Where relevant we have linked directly to that separate post below.

This proposal was created by Nexus DAO contributors Kayleigh, BraveNewDeFi, Dopeee, Rei, Claudio, Chris, and Yuba. Together, we envisioned a model that would allow for efficient, effective coordination among members, where hubs can grow alongside the risk marketplace in V2. By strengthening the foundation of the existing hubs model, members can work with one another to expand our membership and market share. Ahead of our restructuring proposal, we want to align our community on the Nexus Mutual mission and our values, or what we want to do and how we want to achieve it.

Our mission is to build an ecosystem in which anyone can protect anyone else by sharing risk. We sometimes refer to this as a marketplace for risk.

Below is a representation of the mutual’s current ecosystem. 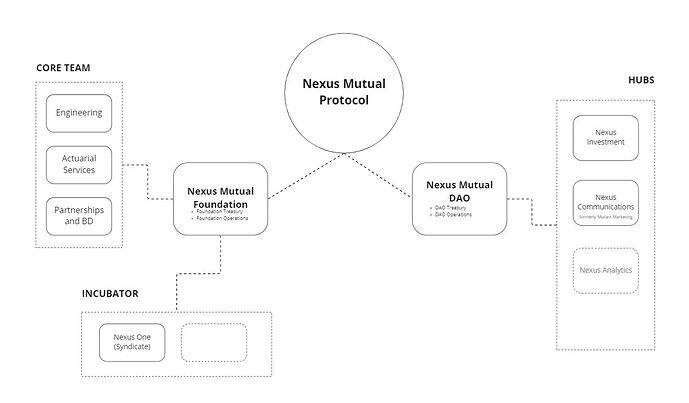 The Nexus Mutual DAO is run by members who participate in discussions across the mutual’s social channels and on the forum. Members vote on DAO treasury related matters on Snapshot and on proposals that affect the protocol through on-chain votes.

Members can also get more deeply involved by contributing to or starting their own working group (i.e., hub) within the Nexus Hubs model.

Currently, Nexus Investment and Nexus Communications are the two active hubs, which were previously ratified through Snapshot governance

These two hubs work on behalf of mutual members Below is a review of each hub, their proposed changes/restructuring, mission, and budget.

Formerly known as Mutant Marketing, this hub was the first to launch in August 2021 and has established multiple successful initiatives over the past year. To date, this hub has managed communication and marketing for the mutual, but the proposed restructuring would broaden the scope of this hub. The proposed changes are outlined below.

The mission of Nexus Communications is to promote Nexus and provide tools to members, syndicates, DAOs and our wider community in order to expand coverage.

The scope of the hub has become more aligned with broader communications, community support, and social media management. To better reflect this, we are renaming this hub to Nexus Communications and making additions to this hub’s mandate.

Marketing will remain a core component of this hub’s operations. To support and help grow the syndicate network in Nexus V2, an in-house marketing agency will be created that will provide marketing services to any syndicates who want to hire the agency. Base support will be provided, but more comprehensive marketing will come at an affordable cost and will allow Nexus Communications to become revenue independent and reduce treasury spend over time.

Nexus Investment started with the Investment Committee, who officially launched this hub in November 2021. To date, this hub has provided detailed analysis and has proposed several investment initiatives to make a portion of capital assets productive.

The mission of Nexus Investment is to invest Nexus’ assets in a way that maximises the return without negatively impacting the mutual’s ability to pay claims on a timely basis.

We are proposing that Nexus Investment adds treasury management to their mandate, which would entail a review of proposed budgets and investment of the Nexus Treasury (formerly known as the Community Fund).

We propose a hub review every 6 months–this will be published as part of the next cycle’s budget proposal and hosted on the respective hub’s community Notion page.

Nexus Communications (formerly Mutant Marketing) budget is due to be reviewed in August, and we propose that all budgets be brought into alignment so that hubs’ budget and review cycles are in sync.

Each hub would submit a proposal every 6 months for funding, which means bi-annual reviews and budget requests would be published ahead of January and August going forward. These requests would be collated for a single community vote via Snapshot to approve.

As outlined above, active hubs will provide a hub review and request funding every 6 months. The flow of funds from the Nexus Treasury to each hub is outlined below.

According to our proposal, cash flow from the DAO Treasury would look like this: 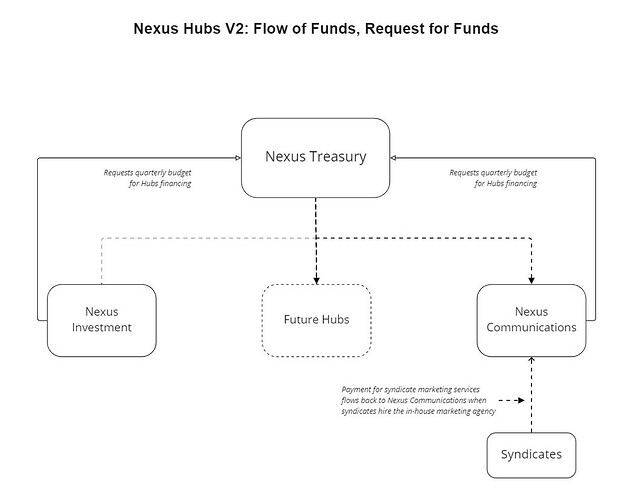 In order to form a new hub, members are required to follow the Snapshot proposal process, which starts on the forum and culminates in a Snapshot governance vote. If members approve the formation of a hub, NXM holders grant the newly formed Hub with certain responsibilities and a degree of discretionary power.

Any prospective Hub or working group should begin with a considered proposal to the community forum with the following information:

Once you have outlined this information, you’ll need to identify your contributor roles within the hub, where you’ll have a hub lead, hub contributors (part-time or full-time), and contractors (if applicable).

Once your proposal is drafted and posted on the forum, you can follow the guidelines in the How to Participate in Nexus Mutual Governance section of the Nexus Mutual docs.

NXM holders grant hubs the ability to form, seek funding, operate with discretion, and work on behalf of members. If a hub leader or an entire hub is no longer achieving their goals, then members can revoke a hub leader’s or hub’s discretionary powers and funding by creating a forum proposal and gaining community consensus via a Snapshot vote.

This proposal seeks $329,512 in total funding for both the Nexus Investment and Nexus Communications budgets for the next 6 months, from August 2022 to January 2023, as well as backpay for Nexus Investment contributors who have worked without compensation since their previous 6-month funding ended in May 2022.

Members can review detailed information about the hub teams, priorities, and budgets in the corresponding forum post here.