Today, SafeDAO was launched, and the Safe team announced the launch of the SAFE token. The SafeDAO will be governed by SAFE holders, who will act as stewards for the Safe community. Earlier this summer, the Safe community announced that Nexus Mutual was selected to act as a Safe Guardian. Safe Guardians are active participants within the Safe ecosystem who have been committed to Safe’s vision and mission—to make ownership in web3 more accessible, collaborative and secure.

Now that the SAFE token has launched, the people or organizations that can claim their SAFE can also delegate their SAFE tokens to a governance delegate. I’d like to nominate myself to represent Nexus Mutual in SafeDAO governance.

I’ve been an avid Gnosis Safe user since 2021, and I’m an active multi-sig signer for Nexus Mutual, Notional Finance, and PoolTogether.

Alignment between Nexus Mutual and SafeDAO

Our communities already share a lot in common. Take our mission statements:

Nexus Mutual’s mission: To build an ecosystem in which anyone can protect anyone else by sharing risk.

Both Safe and Nexus Mutual provide critical infrastructure for web3 users. SafeDAO is driving smart contract accounts as a standard for owning assets, data and identity, and Nexus Mutual is setting the standard for decentralized protection with our comprehensive cover and continued innovation.

The desired outcome for Safe and Nexus Mutual is the same–to onboard the next wave of web3 users, while ensuring their assets are safe and secure.

Since 2020, Nexus Mutual has provided members with cover for Gnosis Safe smart contracts. 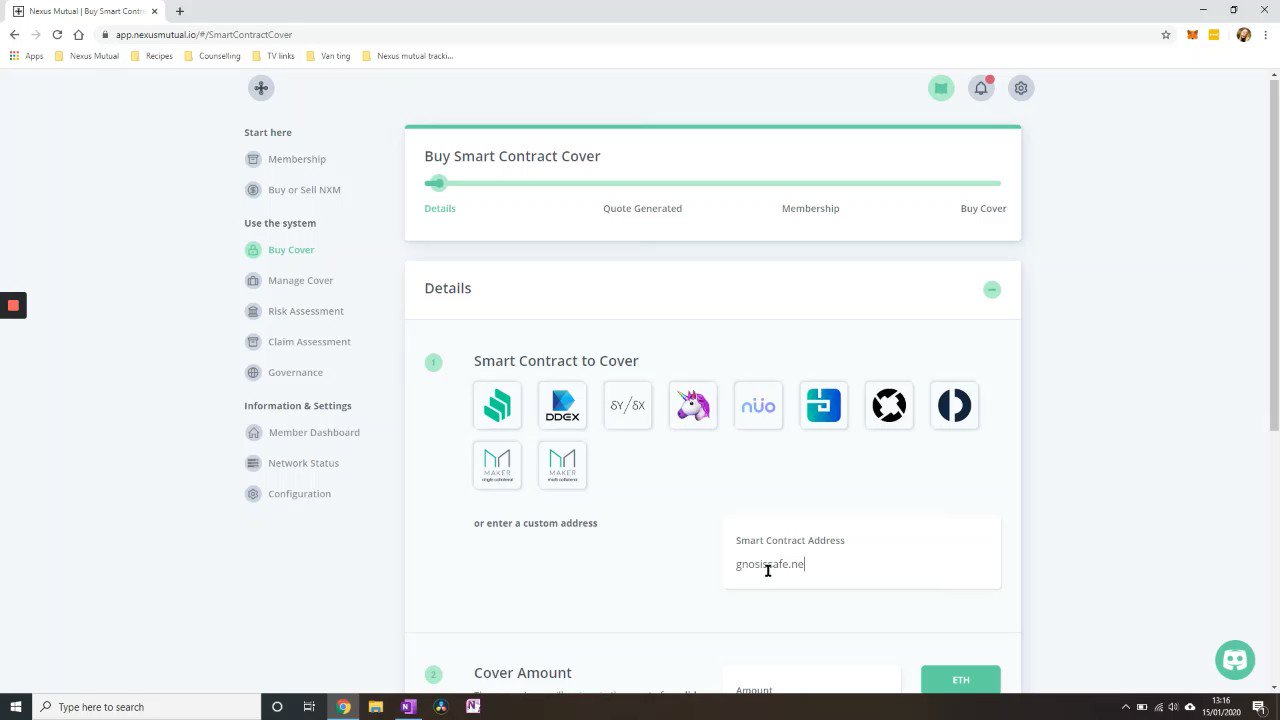 Going forward, the mutual can contribute to SAFE governance in the following areas:

Members have always been focused on smart contract and technical risk within DeFi—the mutual can provide risk analysis for any potential treasury management strategies and provide insight on the evolving risks within the space.

Making ownership in web3 more accessible requires a robust effort to educate new users, so people understand the benefits of using Safe, how to safely participate in the ecosystem, and how to interact with DeFi protocols using a Safe multi-sig.

Through further interDAO collaboration, Nexus Mutual and other Safe Guardians can assist in strategy development on adoption, value accrual, and risk as highlighted in pet3rpan’s outcomes-based resource allocation (‘OBRA’) model that is outlined in the following Safe governance proposal:

As the SafeDAO starts to form around the SAFE token launch, I can use my experience in DAO coordination to help guide the formation of groups within the DAO that work to further adoption of Safe and expand resources for existing Safe users.

In addition to creating the Nexus Hubs working group model, I was a founding member of PoolTogether’s Treasury Working Group (TWG) and have served as Chair of the TWG for the last two quarters. I’ve been an active contributor to Llama since 2021. Working groups and DAO coordination has been my area of focus within Llama. I co-wrote Working Groups are the Scaffolding: A Foundational Approach to Sustainably Scaling DAOs with Yuan Han Li. This essay synthesizes the lessons we’ve both learned as Llama contributors working across DeFi DAOs.

I hope to have the community’s support as the mutual’s proposed SAFE delegate. It’s important to foster DAO-to-DAO communication and coordination going forward, especially within the Safe community since they’ve included Nexus Mutual as one of their Safe Guardians.

Looking forward to discussion on this proposal going forward.

Strongly in support of you, ideally we can delegate the $safe the community fund received to you to act in nexus mutuals interests as well as share you via the nexusmutual socials as a delegate for people to delegate to broadly to represent Nexus.

This proposal has been transitioned to a Snapshot vote to determine if members would like to delegate the mutual’s SAFE voting power to BraveNewDeFi to act as Nexus Mutual’s representative in SafeDAO governance.

After an open comment, review period, the choices presented in the Snapshot vote are: